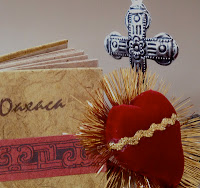 A few miles from the city of Oaxaca in southern Mexico, along the road to Mitla, stands a towering concrete cross that draws long lines of New Year’s eve celebrants in an annual ritual of wishes, dreams, and supplications. Revered as a site of miracles, it stands alone beneath a cathedral sky.
A taxi driver told us about the cross on a holiday visit to Oaxaca several years ago. He described a New Year’s eve scene in the dark of night, a cross lighted with candles and the headlights of arriving cars, of lines of visitors slowly circling the cross to leave a token and a prayer at the base. The spotless white car he was driving, he confided, was evidence of the potency of the site. One year he’d placed a plastic toy automobile on the shrine, along with a few coins and a prayer. The year had brought prosperity and funded the car he now owned.
My husband and I couldn’t resist the intrigue of this New Year’s Eve tradition and promptly secured the driver to take us there on the approaching holiday eve. We set out after dark, following the highway for 30 minutes or so before turning down a dirt road in the sparse, high desert landscape. 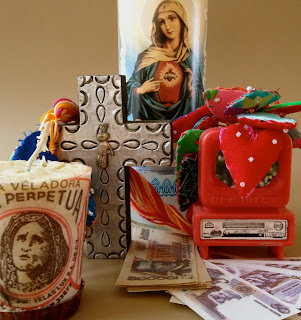 A cluster of garage-sale folding tables dotted the entry road. We eyed the contents of the tables with curiosity—piles of Monopoly money, plastic cows, chickens, houses. Play cars and fake engagement rings. Some hearts, a goat, assorted healing amulets. Practical, no-nonsense representations of items sought by visitors on this night of New Year’s resolutions and requests. I chose a plastic television set, envisioning it as a symbol of media attention for The Spirited Walker which I had recently finished.
We followed our driver to join a solemn procession of people waiting to approach the cross. Like those ahead of us, we left our items at the base, breathed a prayer of supplication and returned to our car.
At home in Oregon, we turned the ritual into a New Year’s custom, inviting friends to join us in declaring an intention for the coming months and sealing it with a symbolic token placed on the table at a New Year’s brunch or dinner. (We found the Dollar Store a great source of appropriate symbols).
I think there may be something magical about setting a representative emblem on the table, solidifying an intention. The visual image moves a New Year’s Eve tradition beyond the dutiful “resolution,” and transforms a “should” into a “will.”  A desire instead of a duty.
Why not give the ritual a try this New Year’s Eve? I wonder if the miracles we seek occur when we are clear enough to visualize the outcomes we desire in the year (or years) ahead.
A Happy New Year to you.

Posted by The Spirited Walker at 9:21 AM
Email ThisBlogThis!Share to TwitterShare to FacebookShare to Pinterest