Intervals Reveal Thrill of the Hill

Lengthening hours of daylight are shifting my energy this month. I’m feeling the tug of summer, and hiking commitments ahead. Fresh momentum is pulsing into my walks. I noticed this shift last week as I approached an uphill slope midway through my neighborhood loop. It prompted me to lift my shoulders and pick up the pace a bit. Turn the slope into an interval!

Thirty seconds into the uphill push I was ready to call it quits. How long had it been since I’d asked my body for this much effort? How long since I’d felt physically strong and balanced enough make these demands of mind and muscles? Several months, for sure, but not long enough to forget the rewards of interval workouts. It wasn’t pain that urged me to slow my pace. It was the whine of a body out of practice. 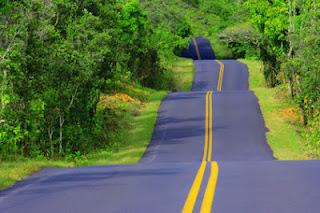 Short intervals that push you beyond the comfort of a familiar pace bring rewards that linger in a surge of wellbeing, and in the strengthening of cardiovascular, muscular, and mental health. Why not give it a try? You don’t need to find a hill for an interval. Use your watch and simply speed up for 60 seconds to a pace that raises mental protests. Set your sights on a lamppost or down the street and use that as an interval target. There are many ways to integrate short, fast walks into your routine.

Then, pay attention to how you feel at the end of two or three brisk intervals. Take time to savor the satisfaction of reaching for more.

Posted by The Spirited Walker at 8:35 AM
Email ThisBlogThis!Share to TwitterShare to FacebookShare to Pinterest