The Radio that Saved Christmas Eve

My recent Día de los Muertos trip to Oaxaca, Mexico, stirred memories of a Christmas long ago--Christmas in a hammock and gifts concealed in a blue plastic radio.

We'd been away from the United States for almost two years, the last ten months of that time in San Jose, Costa Rica, where I taught English in an American high school while my spouse wrapped up a dissertation in British history. 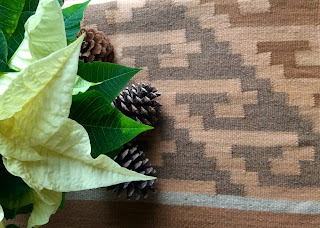 In December 1972, as the school year ended, we piled our belongings into a café-con-leche colored VW van and headed north on the Panamerican Highway, hoping to arrive in Wichita, Kansas, in time to toast the arrival of 1973 in the company of university friends.

We'd been on the road for about a week when we pulled into a rustic trailer camp on the fringe of Oaxaca. In the Guatemalan highlands, we'd shivered through nights of icy temperatures and now I was suffering the tortures of a miserable cold. While my husband headed to the zocolo in search of cold medications, I fell into the hammock we had stretched across our camp site. I had no energy for explorations, no appetite for lunch. It was Christmas Eve,  and I was sick and a very long way from home.

The thick haze of an afternoon nap muffled the voice that roused me. "Sarapes?" it asked. "Sarapes?" I opened an eye to view a young man standing at my feet. He lifted a small woven rug to eye level and waited for my response. I shook my head and closed my eyes. "Pura lana," he continued. "Hecho a mano."  Pure wool. Handmade. Words of the tourist trade. I lifted one hand to wave him away, and settled back into the hammock. 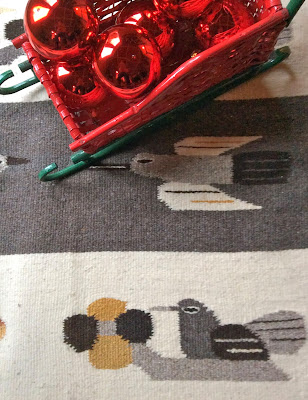 "Excuse me," he persisted. "Do you maybe have a radio?"  A radio? He's asking me about a radio? "What for?" I asked, my curiosity roused.

"I'll trade," he offered. "A rug for a radio. Do you have one? Does it come from the United States?"

I was remembering, through the fog of my plugged head, the blue plastic radio I had stowed beneath the bed in the back of the van. I'd bought it in Costa Rica and had joked that I was taking it home to bring the sounds of Costa Rica with me.

Not American made, no, but a radio.  I hauled it out and we plugged it into an outlet in the trailer camp washroom.  Sounds of Oaxaca filled the space around us as he spread his offer on the ground before me. Small rugs of fine, tight weave. Patterns borrowed from the flight of birds and from lines carved in Mayan ruins.

We talked. We bargained. We turned the radio dial. We nodded in agreement. He took the radio and I took two rugs: the grey rug with the birds in flight, and the rust one bearing the patterns of an archeological ruin in Mitla.

"Now I am happy," he announced, as he wrapped the blue plastic radio in one of his remaining sarapes.  "It's Christmas Eve. My mother wants a radio."

I was happy too, in spite of my cold. And happy still with two small rugs and a Christmas Eve to remember.


Have a joyous Christmas and a prosperous New Year… and give yourself the gift of a walk that connects you the wonder of the season, and with the warmth of friends.

Posted by The Spirited Walker at 8:32 AM
Email ThisBlogThis!Share to TwitterShare to FacebookShare to Pinterest