A Tale of Two Caminos

Last week I ate lunch with a woman who had been weighing shirts, shampoo, and blister bandages as she computed the options possible within the 12-pound limit she had set for her backpack. It had to be lean, yet adequate to sustain her on a 200-mile trek along the venerated Camino de Santiago de Compostela in northern Spain. By now, she’s on the trail.

Along with assessing the priorities of what she’d carry, we chatted about the motivations behind this undertaking. There’s a physical challenge, of course, for one who loves walking. But the Camino de Santiago is a pilgrimage trail, which somehow differentiates it from, say, the new 800-mile coastline trail in Wales. She pondered what the trek would mean for her, approaching the path and the unknowns with curiosity. 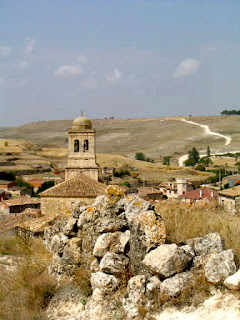 The conversation followed me home where I opened my well-worn copy of The Spirited Walker and reread the comments of a man I interviewed several years ago. James Carse walked 300 miles of the Camino de Santiago de Compostela in a period of grief and transition after the death of his wife. It was, he said, “a physically and spiritually challenging journey into the unfamiliar.... from these efforts you get things you couldn’t have imagined.”

Two days later an email message arrived from another woman—a nurse in Illinois whom I met last year on the Coast-to-Coast trek in England. This year she’d made plans to walk a section of the Camino de Santiago and we’d hoped to meet up along the path in September. Instead, she reported, a diagnosis of breast cancer had changed her route and set her on a different journey into the unfamiliar. After one chemotherapy treatment, her hair was starting to fall out.

Having walked both paths myself—the one in Spain and the one through cancer treatment—I‘d call both journeys a pilgrimage. Both involve the classic components of pilgrimage--surrender, sacrifice, and service. Both provide a physical and spiritual  “journey into the unfamiliar” and yield “things you couldn’t have imagined.”

If a choice were offered, I’d take the challenges of the Camino de Santiago de Compostela over the Camino de Cancer any day, even if it meant sleeping in those hostels where Martin Sheen at least pretended to seek lodging in the popular 2010 movie The Way. But in the end, both Caminos forced me to face limits, values, and priorities. Both brought me home to a deeper, cleaner connection with myself. I wish the same for the two pilgrims whose journeys touched me this week:  “Buen Camino, Perigrinos!”

Read more about the Camino de Santiago de Compostela in Chap 10 of The Spirited Walker, or about my 2004 trek in Week 7 of Healing Walks for Hard Times. Keep up with my training for a 2013 return to the Camino by signing up above for direct email delivery of blog posts.
Posted by The Spirited Walker at 7:43 AM
Email ThisBlogThis!Share to TwitterShare to FacebookShare to Pinterest