Eavesdropping at a Chamber Concert

The only walking on this Sunday afternoon was from the parking lot to the concert hall where I settled into my reserved seat,  pulled my glasses from a pocket, and opened the program for a performance of chamber music. The musical selections by the featured string quartet  opened with the reassuring presence of Mozart and closed with Beethoven to send us home. 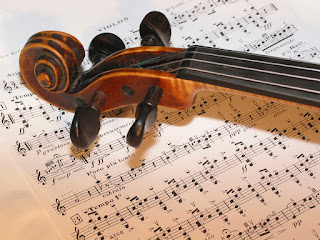 But sandwiched between the familiar comfort of two classical composers lurked a challenge. A contemporary composition, produced in 1995, threatened to jar the afternoon out of the security of the 18th century and into the dissonance of the 20th. Even the visual presentation of this unfamiliar piece aroused wariness with a daunting string of 12 movements.

I moaned inwardly as I scanned program notes describing Elliott Carter’s String Quartet No. 5 as an “experiment in rhythmic relationships, color and texture.”  My spirit hardened in anticipation of something atonal and discordant. Something crackling with tension. Mozart soothed my anxieties temporarily, but as applause subsided at the end of the opening number, I mumbled my apprehension to a young acquaintance in the seat next to mine. A recent graduate of the university’s school of music, he sought to soothe my fears. No, no, he protested. This could be interesting. Try listening to each instrument, he suggested. This composer often gives each player a unique voice, creating a kind of conversation among the performers.

A commanding shriek from the first violin cut short his comments and pulled my attention back to the four musicians on the stage. A second sweep of the bow provoked a low lament in response from the cello. As the cello faded, a fierce plucking of strings barked loudly from the second violin followed by random protests and disconnected comments from the viola. My inner cynic sighed, and decided this didn’t sound at all like a conversation I’d find interesting, or the least bit enjoyable. Still, there was something arresting about the exchange occurring before me. 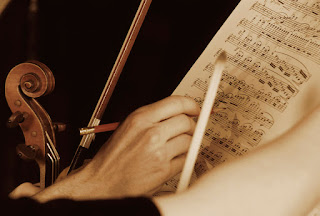 I watched as first one and then another of the four players leaned in toward the center to emphasize a point. Or pulled back, to hurl a discordant note across the space that separated them. At times their individual scores wove a friendly harmony. At times the tempo grew fast and impatient. At times they all spoke at once. It wasn’t music as far as I could tell, but perhaps it was a conversation.

Gradually, I found myself pulled into the seduction of listening in on an intense interaction in a language I didn’t understand. I was eavesdropping on a conversation and guessing at content from the cues in tone of voice, body language, speed of delivery or volume. This might have been four men in a Greek café, agreeing, disagreeing and complaining about the economic woes of the Euro. Or a group of animated Swedes defending soccer teams.

I have no idea what the composer intended to communicate in this musical conversation. I couldn’t guess what satisfaction it offered these performers. But what the program described as an “experiment in rhythmic relationships” became an experiment in listening for me—a conversation in a foreign language that left me surprisingly exhilarated rather than drained.

Borne on a new point of view, new sounds from a classical string quartet produced surprising pleasures. Eavesdropping freed me to become a composer, creating a score of my own.

Scroll back on the blog to read about my 135-mile distance walk in August,
or turn to Take A Walk for suggestions that will get you moving
Posted by The Spirited Walker at 5:22 PM
Email ThisBlogThis!Share to TwitterShare to FacebookShare to Pinterest